While each sexually transmitted disease (STD) can pose varying degrees of transmission risk and methods in which they can be spread, all STDs are contagious. STDs can be spread at any time after initial infection, certain STIs have periods of viral shedding when the virus multiplies and can then be exposed outside the body. The presence of open sores can also increase the risk of spread through bodily fluids. Understandably, talking about the risk of STD infection can make anyone a little uneasy, but having knowledge of STDs, how they are transmitted and when they are most contagious can not only protect your sexual health but others as well! By remaining informed and regularly seeking out STD testing, as recommended by the Centers for Disease Control (CDC) for sexually active individuals between the ages of 13 to 64, you will be taking all the necessary steps to avoid these contagious sexually transmitted infections.1

How Are STDs Contagious? 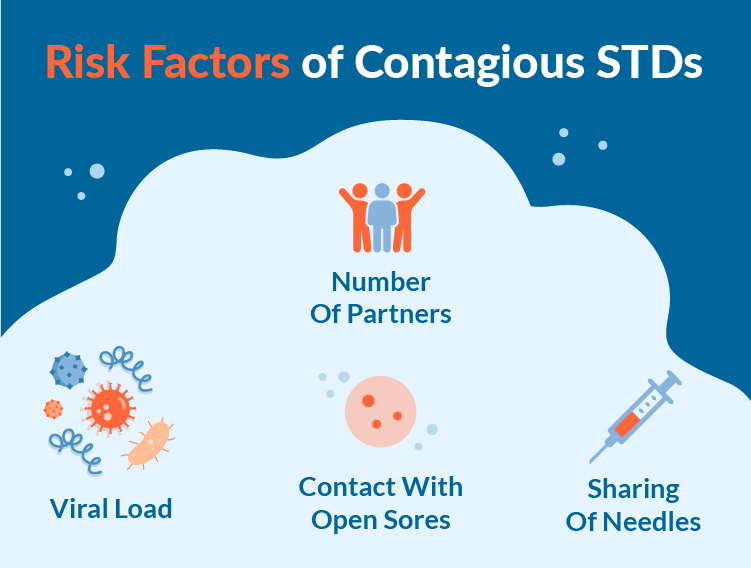 Is hepatitis B contagious?

On the flip side, hepatitis B is a contagious infection that can be spread through sexual contact, blood or other bodily fluids. Since this virus is characterized as a blood-borne disease, it can be spread through vaginal, anal or oral sex and also by sharing or using contaminated needles or syringes, as explained by the CDC.4 It can also remain contagious outside the body for about 7 days, and people usually do not experience any hepatitis B symptoms. But, while fairly contagious, this STD does not spread through common interactions such as sharing utensils, a drink or kissing. Also, unlike the aforementioned bacterial infections, once you have had hepatitis B, you cannot contract it again4.

Hepatitis C is similar to B in the sense that they cause inflammation of the liver and are both pretty contagious. Just like its B variant, this STD is contagious and can be spread through sex, blood, semen and other bodily fluids, but not through kissing, holding hands, hugging or other casual interactions. There are many different genotypes of the hepatitis C virus, so it is possible to become reinfected with another strain, as mentioned by the CDC.5 While hepatitis C symptoms are not very common in the acute or chronic stages of this STD, they can take up to a couple of weeks to months before showing.5

Trichomoniasis is a unique STD because instead of being brought about by bacteria or a virus, this contagious STD is due to a protozoan parasite. Like other STDs, people do not usually experience trichomoniasis symptoms and are more likely to be asymptomatic. Even though the CDC reported millions of infections in their 2018 report, trichomoniasis is one of the most common curable STDs.8 However, this STD can spread fairly easily and women experience a greater sum of infections than men.8 This STI can be spread from person to person but is usually only found in the genital region (rarely in other areas of the body such as the anus or mouth).8 While the limitations of this infection are comforting, trichomoniasis remains pretty contagious and should not be taken lightly.

Syphilis, similar to other bacterial STIs, is a contagious STD. Syphilis, as explained by the CDC, is spread through contact with a sore caused by the STD.9 These contagious syphilis symptoms are often raised and painless sores that usually appear during the primary and secondary stages, but disappear during the latent (asymptomatic stage) of the infection.9 It can also be passed from mother to child during pregnancy9. Due to the latent stage of this STD, it is very easy for syphilis to develop into complications before being noticed or diagnosed.

Herpes is a considerably contagious STD primary due to the herpes symptoms that it is capable of causing. This STD is caused by a virus that normally does not express itself with symptoms. However, the CDC clarifies that this infection can present itself in the form of contagious herpes lesions.10 Direct contact with these lesions or infected bodily fluids (oral or genital) presents a risk for transmission as well.10 Herpes is also known for its viral shedding which can make the skin around the infected area carry the STD as well.10

These STDs, both viral and bacterial, are all quite contagious and can spread fairly easily. While all STDs can spread through unprotected sex, there are certain features of each infection that can increase or decrease its risk for transmission. But of course, no one should take a gamble when it involves their sexual health. The use of protective measures such as male and female condoms and dental dams can all help prevent you or your partner(s) from contracting an STI.

However, these protective measures are limited by their correct, repeated use and coverage, and mistakes happen. Since STDs never always present signs, it is always recommended to get tested at a reliable STD testing center regularly or when you might suspect an infection. It can be easy to second guess the facts surrounding sexual health and the technicalities of each STD, but as a general rule–all STDs are contagious but preventative measures and testing can ensure that you stay healthy and up-to-date on your sexual well-being.