The topic of HIV vs AIDS can be confusing. Especially to those looking to educate themselves on safer sex practices. There are a significant number of people who believe that a diagnosis of HIV is synonymous with AIDS. Not to mention, there are various stigmas surrounding HIV which have led to misunderstandings concerning the disease and the people who have been affected by it. If you should be experiencing HIV symptoms, find one of our local STD testing centers to get tested today. In the meantime, due to the importance of this topic and its relation to sexual wellness, this detailed overview is offered as a reliable and helpful resource to mediate misunderstandings, present facts and explain the topic of one of the more serious viral STDs in a simplistic yet easy-to-understand way.

What’s the Difference Between HIV and AIDS?

There is a bit of confusion surrounding the association between these two terms. While they are often used interchangeably, there is a significant difference between a diagnosis of HIV versus AIDS. Though this difference might seem like a mere technicality, knowing the difference is essential to sexual health awareness. 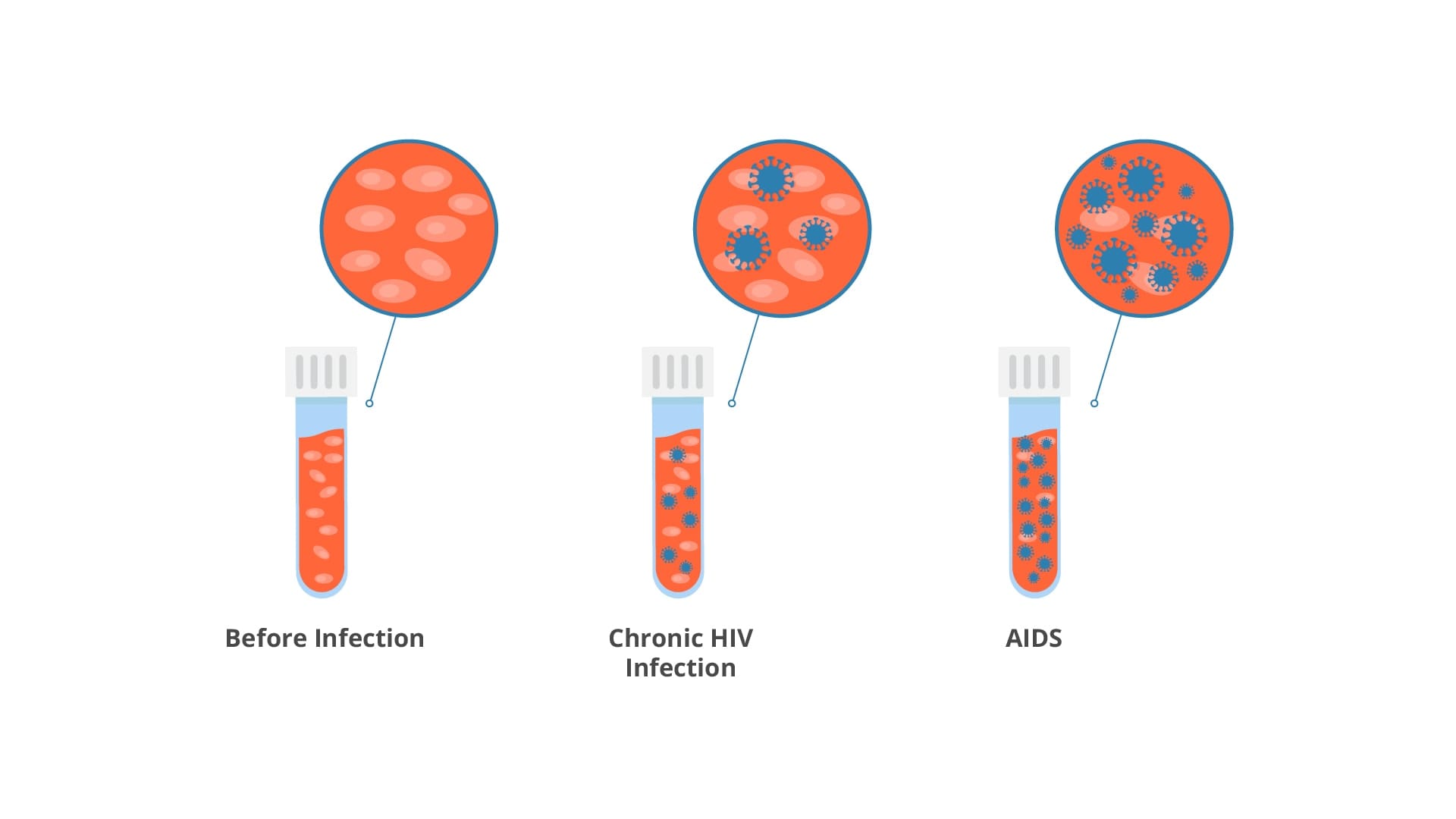 HIV is a disease that can result in the condition of AIDS.

An HIV infection is broken into 3 different stages, depending on the viral load and level of damage the immune system has experienced. These stages include acute infection, chronic infection and AIDS. This progression is what defines the difference between an HIV versus AIDS diagnosis. While HIV is a disease, AIDS is a condition that results from the virus developing without treatment.

What does HIV stand for?

Any learning is best done with a solid foundation of basic knowledge. In order to understand exactly what distinguishes the difference between HIV versus AIDS, we must establish: what does HIV stand for?

HIV stands for human immunodeficiency virus and is an infection that attacks the immune system. This virus is separated into 2 types and targets CD4+ T lymphocyte cells which protect you against infections and illness. As these white blood cells begin to diminish, our immune system cannot work as efficiently or as effectively as it should. HIV-1 versus HIV-2 have different speeds of progression, but both can lead to AIDS and leave the body vulnerable to other illnesses if untreated.

What does AIDS stand for?

AIDS is the last and most serious stage of HIV infection. While AIDS does not have a cure and is a serious condition, many people misunderstand and assume that individuals with this condition can’t lead normal lives. In reality, it is most definitely possible.

AIDS stands for acquired immunodeficiency syndrome and develops as a result of the untreated HIV virus infection. Due to the damage HIV causes to the immune system, a person living with AIDS can have difficulty fighting infections like pneumonia, tuberculosis or other opportunistic infections. HIV typically takes about a decade to advance to AIDS, but the speed of progression can vary. However, thanks to the progress of modern medicine, people with acute, chronic or even AIDS can lead significantly longer lives.

How do you get HIV?

Like many others in the list of STDs, an infection of this virus often begins without signs. While the virus might present flu-like signs, it is more likely to develop unnoticed. Due to its asymptomatic nature, knowing how the virus is transmitted is important to create preventative measures, ensure sexual health and clarify the difference between HIV versus AIDS.

HIV is most commonly spread through sexual contact and needles.

How hard it is to contract HIV can depend on a few variables such as:

However, the only way to know your HIV status and prevent AIDS is to be tested. HIV versus AIDS do not differ on testing methods, so both can be diagnosed with a simple blood or saliva antibody test.

How do you get AIDS?

However, HIV versus AIDS are not necessarily the same in the sense of their effects on the body. While someone may test positive for HIV, they may not have the condition of AIDS. AIDS occurs when there is a specific and significant decrease in healthy CD4 cells.

AIDS occurs when the body’s CD4 count drops below 200 cells/mm3.

AIDs is defined by a dramatic decrease in CD4 cells that help our immune systems fight infection. When an HIV infection continues untreated, the virus increases in number, while the CD4 cell count diminishes. If the virus is not kept in check by necessary treatment, people survive an average of 3 years after the onset of AIDS, and the risk of transmission grows with the increase in viral load.

What is the Treatment for HIV vs. AIDS?

Currently, in the US, most people with HIV do not develop AIDS. This is an especially important talking point since many assume that an HIV or AIDS diagnosis translates to a short life. On the contrary, there are a number of medications that can halt the progression of the virus; greatly increase how long you can live with HIV.

HIV is treated with antiretroviral therapy.

The use of medications to halt the progression of the virus called antiretroviral therapy (ART). With early detection and treatment, those who have contracted HIV can live long, productive lives. Current treatments can keep the virus at low levels and prevent AIDS. If treatments successfully reduce the level of viruses detected in the bloodstream to zero, there is little risk of transmitting the virus. Post-exposure prophylaxis (PEP) can even be used to lower your risk of a permanent infection up to 72 hours after exposure.

What does HIV Mean for Sexual Wellness?

Establishing the difference between HIV versus AIDS not only helps disperse general confusion but also fosters awareness. Understanding the debate on HIV versus AIDS highlights the importance of early testing, safer sex practices and available treatment options.

While HIV is one of the more serious STD cases, not everyone who contracts the virus will develop AIDS. Without treatment, HIV can linger without progressing to AIDS for up to a decade. With treatment, viral load can be controlled, and the immune system can be protected. Even though the topic of HIV vs AIDS might seem like a technicality, their difference means the world for keeping tabs on your sexual health and mediating misunderstandings and stigmas.

As mentioned previously, HIV is commonly asymptomatic, so getting tested is an important element to sexual health. Receiving HIV testing is the best and most reliable option to prevent the spread of HIV, avoid the condition of AIDS altogether and protect your sexual wellness.