While most STDs show no visible STD symptoms and are difficult to diagnose without a proper STD test, there are several that can cause STD sores around the genital region. Noticing an unsightly sore or bump can understandably have you fearing the worst, but if you know what you’re looking for, you’ll have a better idea of how to handle the situation should one arise. STD sores can appear in various shapes, sizes, and colors, and are not indicative of a single STD. And some blisters, bumps, and sores–even those in the genital region–are not caused by STDs at all and are nothing to worry about. At the end of the day, it’s always best to get tested and receive accurate results to ease your worries. 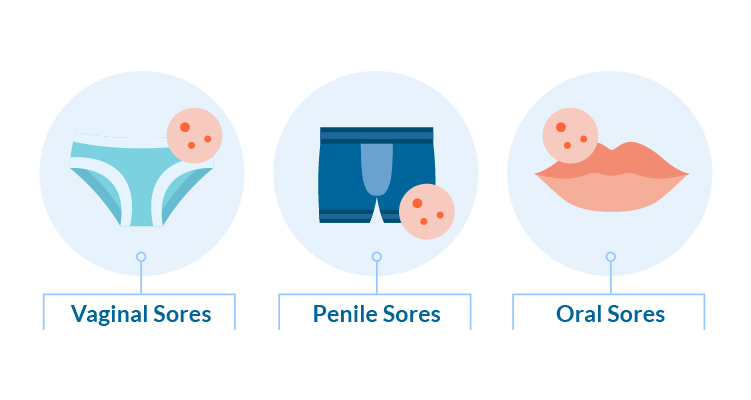 STD sores typically display themselves as vagina sores, penile sores or oral sores. While they are often painful, they can often be mistaken for ingrown hairs, acne or other conditions.

Vaginal sores can certainly be a sign of an STD, but such is not always the case. That is to say that vaginal sores don’t always equate to an STD and STDs don’t always equate to vaginal sores. We’ll get into some of the specific STDs and their associated sores in a moment, but it is important to know that many bumps or blemishes on or around the vagina are not signs of an STD. And many times they are no reason for any sort of serious concern. Non-STD sores on or around the vagina may include eczema, cysts, ingrown hairs, vulvovaginitis, an infected scratch, yeast infections, or a number of other easily treatable conditions. If you’re concerned about a sudden abnormality on or around the vagina, it’s best to consult with your physician for a proper diagnosis and, if appropriate, a proper treatment regimen.

It’s not at all uncommon for STDs spread by skin-to-skin contact to cause bumps, sores, blisters, rashes, or other unsightly blemishes on or near the penis. We’ll get into these types of instances and what they mean in a minute. But first, it’s important to know that not every penile sore or blemish is the result of an STD and many are of no serious concern whatsoever. While it’s understandable to fear the worst at the first sight of a curious abnormality, bumps around the penis may be attributed to any of the following: inflamed hair follicles, pimples, psoriasis, lichen sclerosus, or other minor conditions. If you’re ever concerned about a penile sore, bump, rash, or anything out of the ordinary, it’s best to consult with your physician for a proper diagnosis and, if applicable, an effective treatment regimen.

Oral sores can be due to a sexually transmitted viral infection–a result of the body’s immune system reaction but are not necessarily a sure indication of infection. While these painful spots in or around the mouth can be due to an STD, they can also be due to lip biting, burns or eating acidic foods such as citrus fruits or sour candies. Oral sores due to an STD typically appear on or around the lips, but can also appear inside the mouth as well. Similar to sore spots found on or around the vagina or penis, the only definitive way to diagnose an oral STD is to get tested.

STDs That Cause Sores 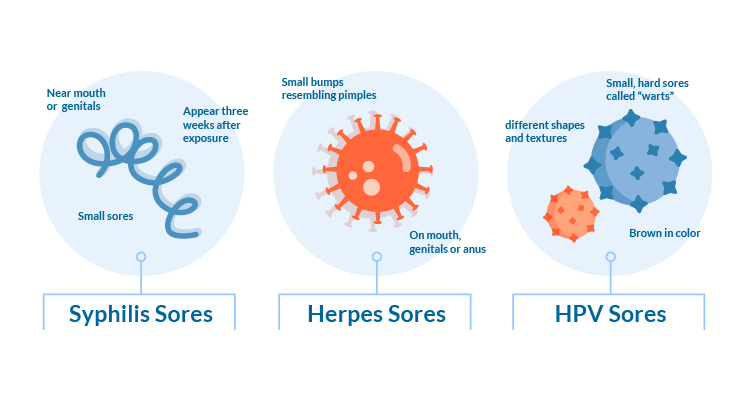 There are three common STDs that cause STD sores: syphilis, herpes, and HPV. Each of these three sexually transmitted diseases produces its own type of sores that are sometimes easy to distinguish from one another if you look closely, but more often take the expert diagnosis of a medical professional. Each of these aforementioned STDs is highly contagious, and it’s always best to abstain from sexual activity if you have a sore that might be caused by a virus or infection.

Keep in mind, while each of these three STDs can cause visual blemishes and sores, they are most often asymptomatic. This means that people may unknowingly carry the infection and potentially pass it along to sexual partners. The only way to know for sure if you’ve contracted syphilis, herpes, HPV, or any other sexually transmitted disease is to utilize the services of a reputable STD testing provider.

One or more small sores or chancres near the mouth or genital region (depending on where the bacteria entered the body) is typically the first visible sign of syphilis in men and women. Syphilis sores tend to appear around three weeks after exposure. Generally firm and round, these sores are not usually painful and can be easily overlooked depending on their exact location on the body. If syphilis is left undetected and untreated, it can develop into secondary syphilis which may lead to more apparent skin rashes on the infected area(s). Chancres and rashes are highly contagious and spread by way of sexual activity, so if you are experiencing either, it’s best to abstain from sexual contact until the infection has been treated and resolved entirely. Syphilis sores will typically go away on their own within three to six weeks, but even if they do, the body is not free of the infection until it has been properly treated with prescription medication.

(NOTE: More often than not, syphilis is asymptomatic, so the mere absence of a sore does not mean your body is free from the infection. The only way to know for sure if you’ve contracted syphilis is to get tested.)

While they may start out as small bumps resembling pimples, herpes sores typically develop into painful and pus-filled blisters on the mouth (oral herpes), genitals (genital herpes), or anus (anal herpes). These infections may be sporadic and range in severity, though your first breakout will typically be the most intense both in terms of appearance and sensitivity. Once your body gets used to the virus, subsequent breakouts, should they occur, are typically not as bad. Herpes sores can be treated with over-the-counter or prescription medication, but unfortunately, there is no cure or vaccine that will rid the body of or protect the body from the virus entirely. Herpes sores are highly contagious and transmitted through skin-to-skin contact, so if you’re experiencing a breakout, it’s important to avoid kissing and sexual activity until the breakout has subsided completely. Contrary to urban legend, the virus cannot live for more than a few seconds outside of a human host, so you can’t catch herpes from a toilet seat, shared drink, or any other touched surface.

(NOTE: While sporadic breakouts are common in those with the herpes virus, some who contract the virus may go their whole lives without ever showing a visible sign. The only way to know for sure if you’ve contracted the herpes virus is to get tested.)

HPV or human papillomavirus is another STD known to cause sores on the body, but like many STDs, visible signs are not always apparent and it’s best to get tested just in case. The most common signs, should they appear, are small, hard sores called “warts”. Typically brown in appearance, these warts can have different shapes and textures. While there is no cure for HPV, warts can be treated by your physician. And even if left untreated, generally these warts will go away on their own anywhere between two months and two years.

In summary, not every blemish or “sore” on or around the genitals should be an immediate red flag. It’s important to pay attention and be proactive when it comes to identifying and seeking treatment for bumps in the genital region, but you shouldn’t need to spin yourself into a panic either. Even if incurable, most STDs are manageable and can be treated to at least some degree. And remember, whether or not STD sores are present, the best and ONLY way to properly diagnose an STD is to find a reputable STD testing center and get tested.